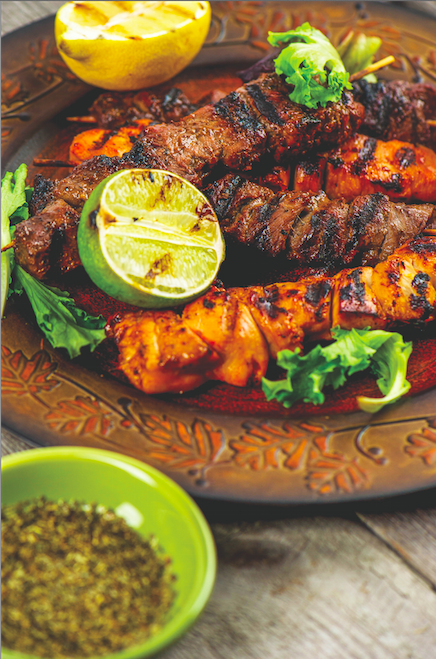 Grilled foods boast inviting flavors that put many diners on the lookout for second helpings. Quite often the magic behind grilled meals lies in the marinade used to give foods that flavorful kick.

Marinades can be used to enhance the flavor of meats, vegetables and poultry. While marinades add flavor, they also may be responsible for some other benefits in grilled foods.

Defined as a savory acidic sauce in which food is soaked to enrich its flavor, marinades help break down fiber and tenderize certain foods. The base of many marinades include vinegar, lemon juice or wine, and marinades can be enhanced with spices, oil and herbs.

It’s important not to let foods sit in marinades for too long, as any alcohol, acid or salt in the mixture can chemically “cook” the food in a process known as “denaturing.” Adhere to timing recommendations when using store-bought marinades, and keep such guidelines in mind when using homemade marinades as well. Many may tell you to let foods sit no longer than four hours. Marinades with citrus juices may require even less time for flavor to penetrate.

The timing of marinade use also will depend on the foods being marinated. Delicate items, such as seafood, may change with regard to texture or color in a matter of minutes.

It’s important to always marinate foods in the refrigerator. Food left sitting out on a counter – even when it’s in a marinade – invites the growth of bacteria. If a recipe calls for marinating at room temperature, continue to marinate in the refrigerator, but extend the length of time you marinate. This helps to prevent foodborne illnesses.

When marinating, use plastic or glass containers so the marinade does not cause a chemical reaction, which may occur if you marinate foods in metal containers. Discard all marinades for raw meats and poultry when the time comes to cook the foods, as leftover marinades may contain bacteria that makes them unsafe to reuse on other foods.

The nutritional benefits of marinating

In addition to flavor, marinades may improve the nutritional value of grilled foods. In 2008, researchers at Kansas State University discovered that marinating meat in antioxidant-rich spice blends can reduce the risk of forming heterocyclic amines, or HCAs, by more than 80 percent. HCAs are harmful, cancer-causing compounds that form when food chars over an open flame at high temperatures. Marinades must be rich in spices to have any HCA-busting properties.

Marinades are a secret weapon in the creation of tasty, tender and healthy foods. They come in quite handy when grilling, and add an extra dose of flavor when cooking over high heat.